What sort of weather can I expect on my tour?

You can check long range forecasts for weather on the New Zealand Metservice Website.

However, the weather can be variable and does not always follow traditional seasonal expectations – summer, for instance, can be both very hot and very cold. 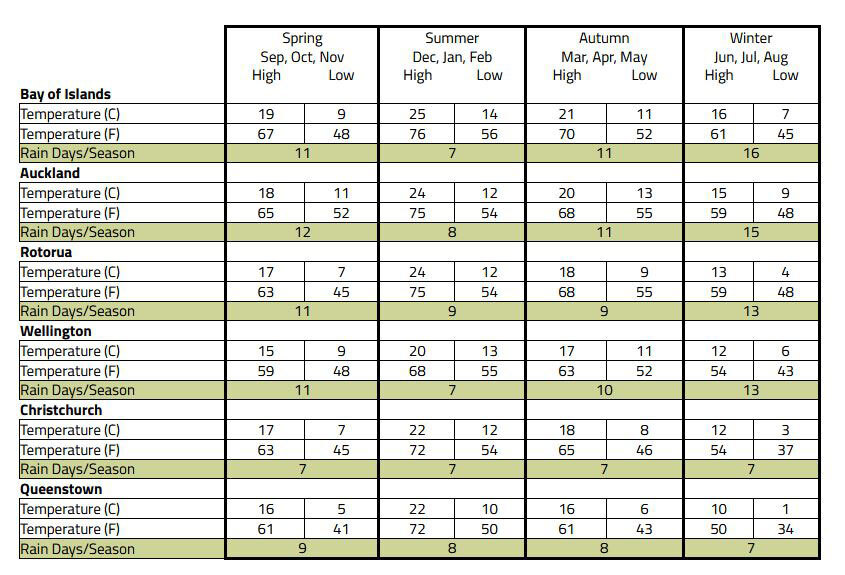 Rainfall: Rainfall is generally consistent throughout the year between 7 and 11 days per month, but some regions (such as the South Island's West Coast and Fiordland) get drier during the winter months.

Snow: In the North Island snow mainly affects the high Central Plateau around Tongariro National Park where ski fields Whakapapa and Turoa are located. Other peaks such as Mt Egmont / Taranaki and mountain ranges also get snow but not in the way that will affect travel through surrounding regions. You are unlikely to experience snow anywhere but the Central Plateau in the North. In the South Island almost anywhere can experience snow. The Southern Alps – stretching the length of the island – is entirely covered during winter meaning you’re never too far from a dusting of white. Canterbury, Otago and Southland generally get the most snow and this is why most of the ski resorts are based here.

Our team of New Zealand specialists can help you with your questions. We can create a holiday to suit your interests, accommodation requirements, self drive or by coach & bus. Whatever you want we can arrange. Just get in touch with us today.

Discover New Zealand is part of the New Zealand Fine Touring Group of companies. It specialises in self drive, seat in coach and escorted coach touring holidays across New Zealand's North & South Islands. We have hundreds of tour ideas listed to inspire you or give you an indication of what is possible to achieve on your New Zealand adventure. Whether it is a luxury fully escorted coach tour or a self driven off the beaten track adventure, we have something suitable for everyone. Our wide range of tour lengths and tour prices give you options and are tailor made so we can build the itinerary to suit your interests and needs.
Our team of consultants are all 100% Pure New Zealand Certified specialists and are passionate about designing your New Zealand holiday. Our consultation service is free and our quotes are provided with no obligation. Based in the heart of Wanaka you can be assured you will get the best local advice when planning your dream holiday to New Zealand. Contact one of our experienced team today.
Discover New Zealand is also Qualmark Gold Certified. This is Tourism New Zealand's official measure of how our business impacts the environment and our team are proud to have achieved the highest level of quality.