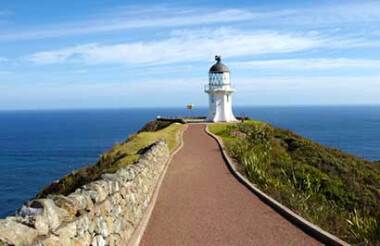 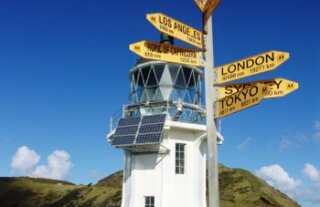 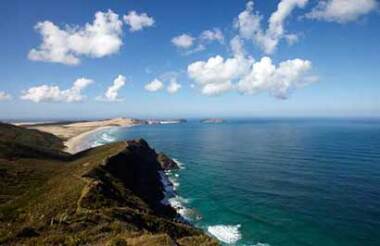 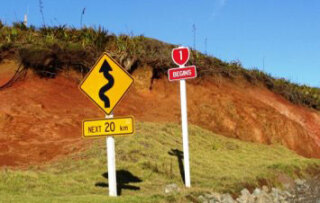 Cape Reinga, situated at the north western tip of the Aupouri peninsular, it's not as many would have you believe the northern most point of the New Zealand mainland but certainly the most accessible. The northern most point is Surville Cliffs 30 km to the east. The Pacific Ocean and Tasman Sea meet here and the surging tides make this section of coastline a very lively place.
Built in 1941 the Cape Lighthouse replaced the original structure built in 1879 on Motuopao Island and has been in operation since. In 1987 the lighthouse was fully automated marking an end to the traditional lighthouse keeper's role at the Cape.
In Maori mythology the Cape holds a special place. The Maori name of Te Rerenga Wairua literally translates to 'the leaping off place of spirits'. The spirits of the dead follow the curve of ninety mile beach heading north to the cape where they leap from a pohutukawa branch. Pausing briefly at the Three Kings Islands to take one last glance behind, they head to their homeland of Hawaiiki.
Also worthwhile is a trip down to Tapotupoto Bay. This beautiful sheltered bay has a gorgeous beach and is a ideal place for a short rest stop. Spirits Bay to the east of Cape Reinga is another worthwhile diversion. The name was given by the Pakeha in acknowledgement of the belief that Maori spirits departed from the shores here. The original Maori name of Kapowairua originated when Tohe, a chief of the Ngati Kahu, set out to visit his daughter. He asked those he left behind that if he was to die they should grasp (kapo) his spirit (wairua).